For nearly half a century, TUDOR has left its mark on the history of chronographs with products of strong identity, unique style and uncompromising quality. By proving equal to the task, by kindling passion, by constantly improving its products and by offering models clearly belonging to their era but retaining their own distinct identity, TUDOR has earned a place apart in the field of sports chronographs, embodied in the development of four successive families of products.


In 1970, with the launch of its first mechanical manually-wound model, the Oysterdate chronograph, the brand immediately impressed aficionados through its exceptional use of bright colours and its choice of characteristic pentagonal hour markers.

The next year, in 1971, a second series of Oysterdate chronographs, today known to collectors by the nickname "Montecarlo", provided technical improvements and a stylistic evolution. Notably, the introduction of blue dial and bezel variants in this series left a lasting impression.

The year 1976 saw the launch of the third family of TUDOR chronographs, known as "Big Block" in the watch collection milieu, and the introduction of an important innovation. With the Prince Oysterdate models, the brand presented its first chronographs equipped with a self-winding mechanical movement and confirmed what the Oysterdate family had begun. TUDOR offered immediately recognisable chronographs with excellent technical qualities.

Finally, the year 1995 marked the inauguration of the second series of "Prince Oysterdate" self-winding chronographs, introducing numerous aesthetic and technical improvements such as a reworked and refined case and a virtually scratchproof sapphire crystal.

Four families of TUDOR chronographs, including a dozen major references, sparked ever greater enthusiasm from year to year. In response to this growing interest, TUDOR has decided to present a detailed account of its evolution through a discerning selection of important historical timepieces.

The first TUDOR chronograph was named Oysterdate. Featuring a manually-wound Valjoux mechanical calibre 7734 and a cam mechanism chronograph, it was introduced in 1970. Its case dimensions were significant, with a 39 mm diameter more imposing than many standards of the time, the characteristically pronounced bevelled edge of its lugs, and its muscular well-honed lines. The very graphic style of its dial was also unusual. A daring wager, but a wager that paid off since the model immediately found its audience.

There were three variations of this first sporty TUDOR chronograph, differentiated by their types of bezel. Two were produced in large numbers, while the third was never commercialised. Their look is unique and noble, their roots technical and sporty. Reference 7031/0 is characterised by a bezel topped with a Plexiglas insert featuring a 500-unit graduated tachymetric scale, which can be used to calculate the hourly average speed between two points. Reference 7032/0 has a satin-finished steel bezel, also engraved with a 500-unit graduated tachymetric scale. The last one, reference 7033/0, featured a bidirectional rotatable bezel with a black 12-unit graduated insert in anodised aluminium; it never went beyond the prototype stage.

The dials of these first three references were identical and comprised three colours: grey background, black counters and a minute track on a white background. In addition, they had unconventional luminous pentagon-shaped painted hour markers that earned them the nickname “home plate” in collectors’ circles because they were reminiscent of the shape of the home plate on a baseball field. Finally, a last particularity, the chronograph minute counter consisted of 45 minutes, an unusual variation on the more common 30-minute counter. 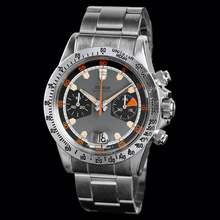 Presented the same year as reference 7031/0, the TUDOR Oysterdate chronograph reference 7032/0 has essentially the same characteristics except that it is equipped with a satin finished-steel bezel with a 500-unit graduated engraved tachymetric scale.

Like reference 7031/0, its Oyster case in steel with screw-down pushers and signed Rolex winding crown... 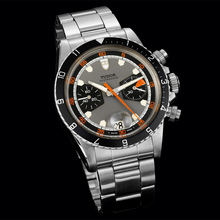 The last version of the Oysterdate chronograph 7000 series is reference 7033/0.

Unlike the two preceding models it was never commercialised. Otherwise resembling the others in every way, it was however endowed with an exceptional bidirectional rotatable bezel with a 12-unit graduated black anodised aluminium insert, which prefigured reference 7169/0, launched in 1971...

The second generation TUDOR chronographs appeared in 1971 and remained in the catalogue until 1977. Nicknamed TUDOR “Montecarlo” by enthusiasts because their dials are reminiscent of a casino roulette wheel, the 7100 series chronographs retain the case of their predecessors as well as the spirit of their dials with painted hour markers, but their movement is different. In place of the Valjoux calibre 7734, the TUDOR chronographs were now equipped with the manually-wound Valjoux 234. This new movement offered the wearer better accuracy thanks to a higher frequency – 21,600 beats per hour versus the former 18,000 beats per hour – and had a more sophisticated chronograph mechanism, with a clutch and column wheel. An additional combination of colours was also introduced on this series with a blue and grey dial and two types of matching blue bezels.

In the early years of the 7100 series, the steel bracelet remained the same as on the first TUDOR chronographs. It later evolved towards a bracelet still of the Oyster-type, but with solid links, reference 78360. 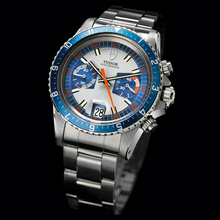 A watch produced in large numbers based on the 7000 series prototype, the TUDOR Oysterdate chronograph, reference 7169/0, featured a rotatable bezel with a 12-hour graduation to tell the time in a second time zone.

This reference existed in two colour combinations. Presented here with a blue and grey dial, it was also available in black and grey. Like the other references of the 7100 series, the 7169/0... 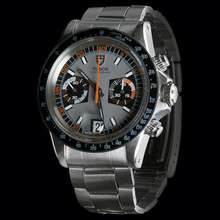 Oysterdate reference 7149/0 with a Plexiglas bezel and a 500-unit per hour graduated tachymetric scale was presented for the first time in 1971 and progressively replaced reference 7031/0 in the catalogue.

To the qualities of the latter, it added improved performance thanks to the use of a new movement...

In 1976, TUDOR presented a new family of products which constituted a small revolution for the brand. Indeed, these new Prince Oysterdate watches were the first chronographs in the history of TUDOR to be equipped with self-winding movements.

Listed under the name Prince Oysterdate, they were also known by the names “AUTOMATIC CHRONO TIME” or “CHRONO TIME” referring to the signatures displayed on their dials. While their cases retained the general lines of the previous families, they became thicker to accommodate the rotor of the self-winding movement, which earned them the nickname “Big Block” in collectors’ circles. The name “Big Block” endured in the following 79100 series introduced in 1989, which featured only minimal modifications.

Like preceding generations, the 9400 series consists of three references distinguished one from the other by their type of bezel, a feature that is also present on the “Big Block” models of the 79100 series. Likewise, several dial variations were available under the same reference number. Two aesthetic trends characterise them: one freely inspired by the spirit of the dials of the previous two series, sometimes called “Exotic” by collectors; the other, much more illustrated in the catalogue, emphasising a significant dial-counter contrast with black and white or sliver and white combinations.

The movement at the heart of these new chronographs was the Valjoux calibre 7750. Having the same diameter as the manually-wound Valjoux 234, 30.4 mm or 13 lines, it was 1.5 mm thicker than the latter and had a frequency of 28,800 beats per hour. Its chronograph mechanism was a highly reliable cam and oscillating pinion system. The architecture of this new movement brought about a reorganisation of the dial with the addition of an hour counter, the transfer of the group of counters towards the left of the dial, and the relocation of the date aperture to 3 o’clock. 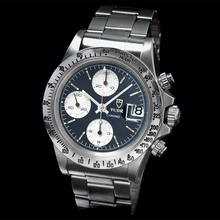 In spite of its official name, the Prince Oysterdate chronograph series does not display its name on the dial.

Instead the indications “CHRONO TIME”, as on the 1976 model presented here, or “AUTOMATIC CHRONO TIME” on other dial variations are displayed... 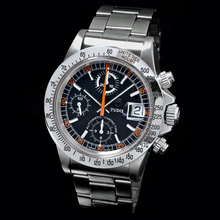 A dial variation of reference 9430/0, sometimes called “Exotic” by collectors, who considered it an alternative to the main black and white versions because it was little illustrated in the catalogue, owed much to its 7000 and 7100 series predecessors.

With an inspired colour combination, a minute track whose divisions evoked a casino roulette wheel, and an orange seconds hand similar...

In 1995, with the introduction of the series of 79200 references, the appearance of the Prince Oysterdate self-winding chronograph was rethought subtly but significantly. To begin with, the case, which over three generations of chronographs had essentially retained its famous imposing, sharp presence, became more refined and softer. Keeping a highly recognisable silhouette, it now presented to the eye softer lines consisting of curves and rounded configurations.

Three more notable changes marked the design of this fourth generation: a new characteristic dial, silver with cream-coloured counters, was introduced, a black anodised aluminium insert with a transfer replaced the traditional Plexiglas tachymetric-scale bezel insert, and a sapphire crystal with a Cyclops lens was adopted to replace the Plexiglas crystal.

Its movement remained the self-winding Valjoux calibre 7750 in a substantially improved version. Its finishing was characteristic and benefitted from a particular aesthetic effort. Entirely refreshed, its decor was called “special TUDOR”. Its rotor was no longer decorated with transfer marking, but engraved and gilded. Its screws were now polished rather than matt.

In 1996, the company Montres TUDOR S.A. celebrated its 50th anniversary. Having attained its maturity, the brand was now known in all markets. Thus the direct references to Rolex were gradually disappearing from the cases, winding crowns and bracelets of TUDOR watches. 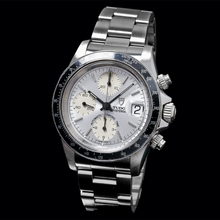 Reference 79260 was the one on which the tachymetric-scale bezel with the Plexiglas insert was replaced by an anodised aluminium insert with a transfer.

he example presented here was produced in 1996 and featured the new-variation chronograph dial with a silver background and cream-coloured counters.. 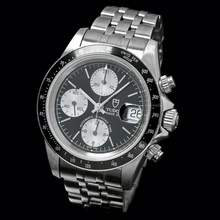 As of 1998, the TUDOR Prince Oysterdate chronographs appeared in the catalogue on steel bracelets with five links referenced 62490 and signed TUDOR.

The Oyster bracelet was thus progressively abandoned. Reference 79260 illustrated here and produced in 2000 bore only TUDOR markings and had, logically, abandoned the Oyster name...

The Tudor chronographs have always been of great interest to collectors, due to the wide range and variations available.


by Ross Povey – The Tudor chronographs were very fortunate to have been gifted, by Hans Wildorf, the Oyster case and with it they produced some of the most memorable and innovative sports chronographs of the 1970s and 80s. In a world dominated by monochrome sports watches, Tudor’s designs stood out as eye catching through innovative use of colour, especially on the chronographs and diving watches. This use of vibrant colour has been a notable feature right through to watches in the current collections.

During the opening day of Basel World 2010, Tudor launched their Heritage line of watches to the world and immediately it became the most talked about watch launched that year.


by Ross Povey – Each year since, Tudor has celebrated its rich past and iconic vintage models through the Heritage line’s reimagining of key pieces and every time we eagerly await the unveiling and never once have Tudor disappointed!

read the full article
The History of TUDOR Continues…